there is a time for silence, and a time to speak out 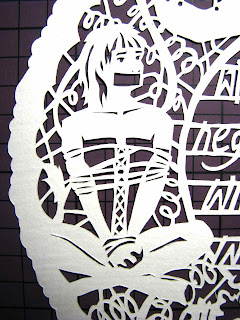 it is not a good time to be a jewish woman.

it should be. but it isn’t.

in israel, Anat Hoffman and others are intimidated and arrested at the Kotel. they were singing, saying the shema, and wearing tallitot. Disturbing the peace. They were raising their voices and making their presence felt. Which doesn’t go down too well with the black-hatted bully-boys who are claiming ownership over the public spaces in Israel.

And here in the UK, in the inside closed world of haredim, it appears that one woman (or possibly more) have been taken advantage of and coerced into improper sexual activities. their leaders have successfully nurtured a culture of mistrust of the outsiders, so they won’t report it, and the cover-ups and gossip thrives. and while we all speculate who the rabbis are. who knew what and why they aren’t saying. or why they are saying some things and not others, and the power games between the various factions continue. Amongst all of that are women who are being intimidated into silence.

And at the other end of the spectrum on our TV’s Jewish women are being portrayed as tired stereotypes that we wince, cringe, and tweet our disgust. Jewish women depicted as caricatures, and we want to reach for the remote.

turn them off. turn off these jewish women who are loud, brash and inappropriate. they might say something that will make us uncomfortable. remind us of the flaws in the community. Our idealised Jerusalem, Golders Green or Hampstead.

This is not about the character of Anat Hoffman and whether or not what she did was a deliberate provocative political act or a genuine expression of spirituality. But there is a principle of m’toch lo’lishma ba lishma - if you start to do something for the wrong reason you will eventually do it for the right reason, so don’t examine inner intentions, just do it. That principle is never applied to women and their spirituality. Women have to be perfect before they can protest and be taken seriously. It's not relevant why Anat Hoffman said shema. The fact is that she raised her voice and prayed. Loudly. And if that is something a woman at the Kotel can be arrested for, then there is something very very wrong.

This is not about how consenting or not was the woman involved in the case in GG. This is about women being vulnerable to leadership and authority, not being safe and being used by men in their power plays. If what is said to have happened didn’t actually happen, but is someone causing trouble, why create a sex scandal? Because you can get away with portraying women as silent victims of a sexual predator. This is a consequence of making a virtue out of women’s silence. Women will not be able to come forward and speak when they need to. Either to clear an innocent man’s name, or to verify, expose abuse, and prevent further damage.

And this is certainly not about any of the individual women who are participating in the Jewish Mum of the Year catastrophe. This is about the context Jewish women are placed in. There is only one way to be a Jewish woman, the particular role of a particular type of Jewish Mother. They are framed in a setting of tired stereotypes to be smothering, brash and dominating. They may be loud but we don’t want to hear them, their voices have no real power.

Because this is about learning to hear a woman say “Shema! - Listen!”
Posted by Jacqueline Nicholls at 03:29

In your best way you have given voice to women through your art. The time is now for women everywhere to stand up once again and demand to be heard. Can we do it together? Can we women stand side by side and not judge the other's brand of holiness? Can we not succumb to the labels and simply see female humanness desiring spiritual fulfillment and communal acceptance? My heart too is heavy and my mind craves an action that will bring about a better tomorrow.

Jacqueline, how sad that in your self portrayals you define your existence within the bounds of being a woman, a Jew, a Jewish woman. Learn to be whole, find out what is missing and then become a person, a manifestation of your beliefs and actions.

Actually this is all really offensive, yes I am religious, yes I wear a hat but I don't need to be put in your little box of suffering Jewish womanhood, move beyond it .... and actually with the plethora of opportunities for women to learn Gemara as opposed to many years ago, we are moving slowly ahead...slowly albeit. Things whilst flawed in terms of agunot are looking up from 50 years ago.